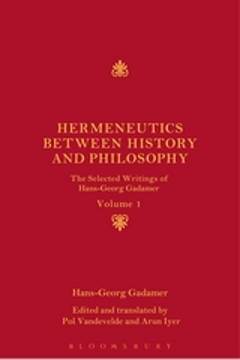 Hermeneutics between history and philosophy

Hermeneutics between History and Philosophy collects together Gadamer's remaining important untranslated writings on the problem of history and the major philosophical traditions of the 20th century from the standpoint of hermeneutics. In these writings, Gadamer examines important thinkers as Husserl, Heidegger, Sartre, Bourdieu and Habermas and their ongoing legacies. This volume also includes a preface by the editors, who are also the translators, presenting the structure of the volume, a substantial introductionsituating Gadamer's particular project and examining the place of hermeneuticsvis-a-vis the disciplines of history and philosophy in the 20th century. The translation is followed by a glossary of German terms and Greek and Latin expressions, as well as a bibliography of all the works cited and alluded to by Gadamer.

H.-G. Gadamer, Between history and philosophy